'Scary Movie 5' Lindsay REFUSED to Kiss Charlie ... Because His Mouth Grossed Her Out... 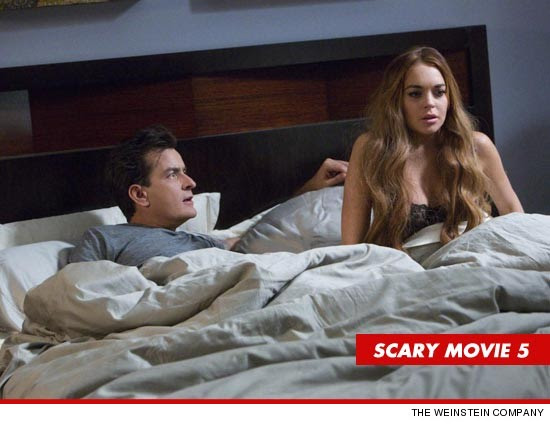 Who KNOWS where his mouth's been??? At least that's Lindsay Lohan's explanation for shutting down a "Scary Movie 5" kissing scene between her and Charlie Sheen -- saying she refused to lock lips with him in the movie because of his spotty history.

Sources close to Lindsay tell TMZ, she was supposed to kiss Charlie three times during their "Scary Movie" bedroom scene, but she ultimately refused to do it because of Charlie's wild partying past.

It's unclear what Lindsay was so paranoid about -- but we're told BOTH parties had to sign releases that they didn't have cold sores.

Lindsay's telling friends she warned producers ahead of time that she had issues with kissing Charlie -- who's had considerable dental work done in the last couple years -- but they didn't change the script until it was time to shoot the scene.

We're told they used a body double for some of the kissing parts -- with moderate success -- but otherwise tried to write out the kissing entirely.

According to sources, Charlie was cool as a cucumber about the whole thing, and never voiced any concerns with the rewrite ... or Lindsay's objections.

In fact, as we first reported, Charlie eventually gave Lindsay $100,000 to help pay off her taxes.