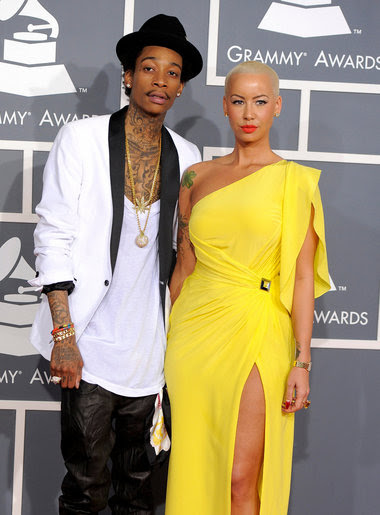 AP Photo/Chris PizzelloWiz Khalifa, left, and Amber Rose arrive at the 54th annual Grammy Awards on Sunday, Feb. 12, 2012 in Los Angeles.
"Work Hard, Play Hard" rapper Wiz Khalifa and his fiancée Amber Rose are reportedly expecting their first child together.
A source tells Radar Online the pregnancy was unexpected, but the couple is happy to start a family together.
"Amber's already had to make some big lifestyle changes, like not smoking cigarettes anymore," the source said. "As a model she's used to having a thin waist, so this is going to be an adjustment for her."
Khalifa and Rose first revealed they were engaged this spring, and rumors have persisted over the past month that she had become pregnant. Three weeks ago, the 24-year-old hip-hop star denied the baby buzz but did promise his fans that "she will have my baby in life, and you guys will know when she's pregnant."
According to the Daily Mail, the 28-year-old Rose is reportedly due in January and the couple may rush their nuptials for an October wedding date.
Wiz Khalifa is scheduled to perform in Syracuse at the Oncenter War Memorial Arena on Thursday, October 18. Music starts at 7:30 p.m. with opening acts Juicy J, Chevy Woods, Lola Monroe, Berner & Tuki Carter.
Tickets are currently on sale for $29.50 and $39.50, plus additional fees.
Khalifa's sophomore album, "O.N.I.F.C.," is due in stores September 18 and features the latest single "It's Nothin'" featuring 2 Chainz.
Posted by JoeBlaxTV at 8:33 AM