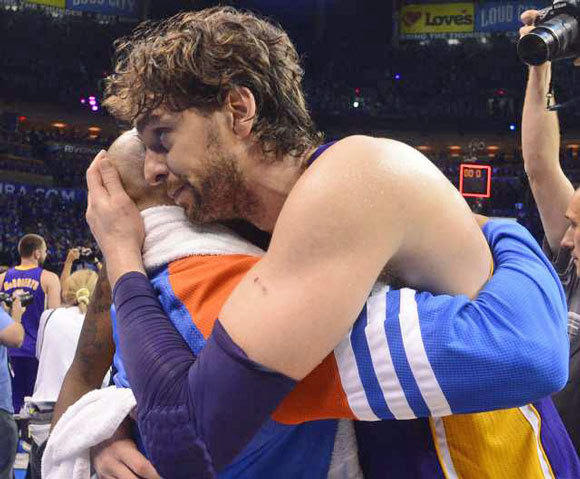 Could Pau Gasol be wearing an Atlanta uniform next season? (Larry W. Smith / EPA / June 27, 2012)
The Atlanta Hawks have aggressively tried to trade power forward Josh Smith to the Lakers for Pau Gasol, initially expressing interest in Gasol shortly after Oklahoma City eliminated the Lakers in the Western Conference semifinals, The Times has learned.
Smith has been unhappy in Atlanta for more than a year, his dissatisfaction starting after the 2010-11 season because he felt he was an unfair target of criticism by coaches and media members.
In separate activity leading up to Thursday’s amateur draft, the Lakers are also open to trading Gasol to a team with a high first-round pick because they covet Kentucky freshman Michael Kidd-Gilchrist. Atlanta holds the 23rd pick and cannot help in that area.
No deals were imminent for the Lakers, who hold only the 60th and final pick in the draft. They have not had a first-round pick since taking Javaris Crittenton in 2007.
Last season, Smith averaged career-highs in points (18.8) and rebounds (9.6) for the Hawks. He is only 26, five years younger than Gasol.
If the Lakers struck a deal with Atlanta, they would lose the height advantage that made them one of the longest teams in the NBA — Smith is 6 feet 9, three inches shorter than Gasol — but would instantly become more athletic.
Smith is an incredibly active defender and has career averages of 1.3 steals and 2.2 blocked shots. Two years ago, he became the youngest player ever with 1,000 career blocked shots.
He has one more year on his contract for $13.2 million and becomes an unrestricted free agent in June 2013 unless he signs an extension. The Lakers would also benefit financially from a deal involving the two players: Gasol has two more years and $38.3 million on his contract. It is unclear which player would accompany Smith to the Lakers in such a scenario.
The problem with Smith is his percentages. He shot only 45.8% last season, very low for a power forward, and was a dreadful 63% from the free-throw line. He probably takes too many three-point attempts as well, making only 28 of 109 last season (25.7%).
Smith isn’t nearly as strong as Gasol in shooting, though he averaged a commendable 3.9 assists last season. Gasol averaged 3.7 a game.
Like Smith, Gasol could use a fresh start with a new franchise.
He was part of the proposed Chris Paul trade in December that was vetoed by the NBA. He never dragged his feet after the trade was nixed, but his play suffered in accordance with Andrew Bynum’s improvement.
Gasol failed to make the All-Star team after three consecutive appearances and stalled in the playoffs, averaging 12.5 points and shooting 43% in the Lakers’ short-lived run.
Gasol was similarly small in playoff stats the previous year, averaging 13.1 points and 42% shooting as the Lakers were eliminated by Dallas in the West semifinals.
Kidd-Gilchrist averaged 11.9 points and 7.4 rebounds for Kentucky, which won the NCAA championship. Listed at 6-foot-7, Kidd-Gilchrist is projected to be one of the top five picks in the draft.
Posted by JoeBlaxTV at 4:09 PM