Father forces 7th grade son to stand on the street wearing a sign about his failing grades... 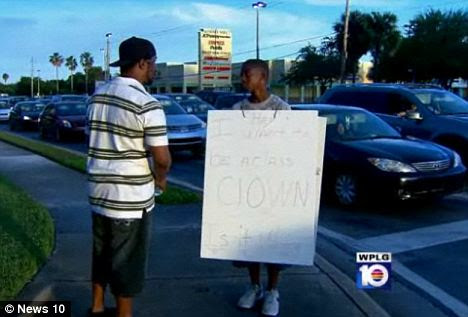 One Florida father is trying to punish his son for his failing grades by using peer pressure.

Michael Bell Sr. was upset by the fact that his son came home with three F's on his report card, so came up with an unusual way to teach the self-proclaimed 'class clown' a lesson.

Throughout his spring break this past week, Michael Bell Jr. had to stand at the corner of a busy intersection in Miami while wearing a poster that told passers-by about his bad grades.

The teen had to wear a poster that read 'Hey, I want to be a class clown. Is it wrong?' on his front side. 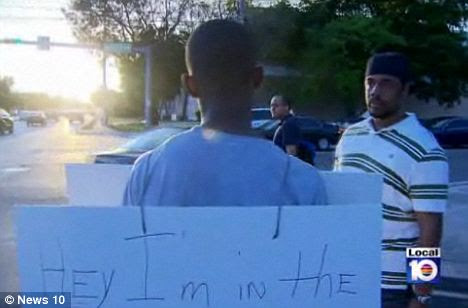 On his back, there was a longer explanation for inquisitive drivers: 'Hey, I'm in the 7th grade and I have an 'F' for the semester. Is anything wrong with that. Blow your horn if you don't think so. Thank you!!!'

Like all teens who are concerned about their reputations, young Michael took the lesson to heart.

Unfortunately for Michael, he couldn't shake the grades off as he is failing three classes- civics, language arts and math- so his dad hopes that the embarrassment will be too much for him to take a second time.

His father was with him the entire time that Michael was standing on the corner of North Kendall Drive in south Miami.

'He has been screwing up in school, behavior and right now I am trying to send a message to him,' Mr Bell said.

'Right now, this is the only thing I have left to try and reach him.'

Read more: Father forces seventh-grade son to stand on the street wearing a sign about his failing grades | Mail Online
Posted by JoeBlaxTV at 5:59 PM