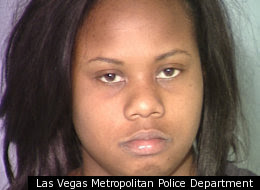 LAS VEGAS — The frenzied woman was shedding clothes as she ran barefoot, bloody and screaming through northwest Las Vegas. When police said they caught up with her, she was naked.

Her name was Danielle, she said, and the blood on her hands was from the "lamb of God."

Slaughter's boyfriend had summoned police to their house, where investigators found the girl dead in a bedroom. A pair of scissors was nearby.

"Did I kill my daughter? Is she dead?" Slaughter, 27, asked homicide detectives who questioned her before she was jailed Monday.

Police said they believe the scissors were used to stab the child, though autopsy results were pending on a cause of death.

Slaughter refused Wednesday to leave her jail bed for her first court appearance on a murder charge. An angry judge reset arraignment for Friday and told a jail supervisor by closed-circuit video that he wants Slaughter brought forcibly to court if necessary.

"I have concerns with delaying a case with such a serious charge," the judge said.

A deputy Clark County public defender, Andrea Luem, told the judge she was worried about Slaughter's mental condition. Luem noted that Slaughter was being held in supervised isolation at the Clark County jail, and said she hoped to obtain a psychological evaluation for her.

"My concern is whether she's able to understand the charges," Luem said.

Slaughter's boyfriend, Ashton Lyken, and several friends and supporters attended the brief court hearing. They refused to speak with reporters outside the courtroom.

In a recorded interview with police early Monday, Slaughter told investigators she had been having trouble sleeping since she started taking the weight-loss product Hydroxycut four days earlier and had slept just one hour the night before she was found in the streets. She said she had been feeling "an evil presence" for several days.

Although Slaughter described being sleep-deprived while taking the caffeinated dietary supplement, Homicide Lt. Ray Steiber said Wednesday that it was not clear that the product was to blame.

"We don't know what caused her actions," Steiber said.

It wasn't immediately known whether federal officials have received complaints linking Hydroxycut to confusion or delusions. The U.S. Food and Drug Administration noted its only recall, in 2009, was over complaints of liver damage, but it has since been reformulated and returned to the market.

A police report said Slaughter told investigators "she never felt this way before," and that she said she wanted to remove the evil she felt from the house.

Slaughter told police she kept her daughter home from day care on Sunday because of the evil presence.

She said they were sitting on the bed when the girl spoke in "evil words," laughed "in an evil voice" and clawed and kicked at her. The mother said she picked up scissors and struck the child several times.

"Danielle told detectives she could not believe she killed her daughter," police said in their report.